2. The Failures of American Industry

In the last several years we have seen several companies fail, some spectacularly (Enron, World Com) are less so. Some going through bankruptcy proceedings (several airlines and an auto parts manufacturer), others through painful restructuring (including two major Long Island companies, Symbol Technologies and Computer Associates). Bell Labs that used to be the pride of American technology and where many of inventions that led to the Computer era initiated, is not only a shadow of its former self but it is also about to be acquired by a French company. Xerox PARC, the other laboratory that led to the Computer era barely exists. Where are future innovations in technology are going to come from? Maybe from the Academia Sinica in Beijing. Many American icons, RCA, Pan Am, TWA, AT&T have disappeared. Are General Motors and Ford going to be next?

I believe there is a connection between the income discrepancy discussed in No. 1 and the company failures. Two factors: As I already pointed in No. 1, when income is accumulated by the super rich it is not likely to be spent in consumer goods but rather in exotic purchases. Money taken from the middle class is taken away from the consumer market.

A second factor is that business executives have been adopting a particular selfish attitude trying to maximize their own income at the expense of the well of the companies. It is not only the executives of Enron and World Com who abused the interests of their shareholders (many of them pension funds) and their employees. So did several others although to a lesser degree that kept them on the right side of the law (but on the wrong side of ethics). I have detailed elsewhere the story of Symbol Technologies. The greed and mismanagement there were not limited to those who broke the law.

What has happened in the last 50 years or so is the so-called people's capitalism. Individuals do not own major parts of companies any longer. Instead the managers supposedly work for the mass of the stockholders. Unfortunately, this is not far from the Soviet model where the "people" "owned" everything and the managers worked for the "people." As a result managers do not care about the long term well being of the company and look only for what is best for them. (The parallels between the Soviet and the modern capitalists systems were pointed out by J. K. Galbraith in his book The New Industrial State.)

By manipulating the stock price they increase their income to astronomical levels (through options, etc) and let the companies crumble. Such irresponsible greed has led to the demise of companies as well as the downgrading of industrial labs. How can we counteract this tendency? Make the managers have a stake in the long term health of the company. I have read several ideas about how this can be done, mainly by allowing managers to cash stock options only in the far future. But of course the current managerial crowd objects to such measures. It will make them work to earn their money.

It is interesting to compare the apparent prosperity of the American economy with the apparent stagnation of the Japanese economy. American companies slashed costs by large layoffs while moving operations out of the country without concern about the fate of their employees. In contrast, Japanese companies avoided large layoffs. Economic stagnation was a small price to pay for keeping social stability.

This brings up the issue of balance. People like to think in simple terms of good and bad and the news media encourage them to do so. We hear talk that free markets (used to be known as capitalism) are good or that fighting poverty (used to be known as communism/socialism) is good. In reality pure capitalism and pure socialism are both bad. I recall some maxims: "capitalism is based on greed and socialism on envy" (both deadly sins) or "Under capitalism, man exploits man. Under communism, it's just the opposite." (Attributed to J. K. Galbraith in Quotations Space.) Or “Under capitalism man exploits man; under socialism the reverse is true” (Claimed to be a Polish proverb in Think Exist.) The modern experience suggests that regulated free markets are a better alternative to either extreme. Clearly, the government should regulate only some part of the economic activity but should not have control over the economy. The key question is what would be the extent of the regulation, neither 0 or 100% are acceptable answers.

What I believe is happening that the relaxing of government regulation that started in the Reagan era, not only contributed to the income inequality, it also contributed to the destruction of companies. Consider two ways of earning an income of $1 million a year. One by managing a company of 10,000 people, the other by earning it in stock market trading. (While some conservative economists argue that the latter also creates jobs, I prefer to look at the immediate impact.) In the former there is an increase in overall wealth of the society, in the latter there is only traffic in wealth, part of which "sticks in the hands of the carrier."

Kevin Phillips makes a big issue in American Theocracy of the shift of the economy from manufacturing to financial services. On page 274 it displays a diagram from Baron's that is shown below (produced by redrawing the original - it is not an exact reproduction. 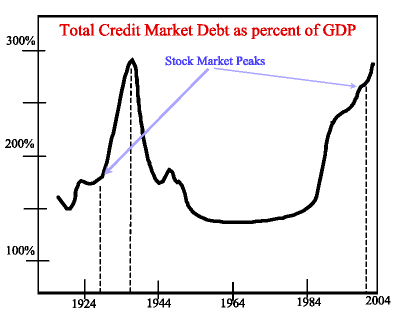 The similarity between this diagram and that shown in part 1 is remarkable. The peaks do not occur in the same year. In the above figure they occur a few years later than in the figure of part 1.

This may have been a bit rambling, but what I am trying to say is that replacing industrial activity by financial manipulation is not only risky in its own, it also contributes to increasing the income inequality.

Comments:
You are referring to "Academia Sinica in Beijing". It looks like it is in Taiwan:

There are Academia Sinicas in both places (and I have visited both: the one in Taiwan in 1973 and the one in Beijing in 1985). Actually the location it does not matter for the point I made. By neglecting its own research laboratories our country risks of losing technological leadership.